I’ve opted out from Spotify. Why, someone might wonder. Well, it’s one of those things I do, when I try to make a political statement – which has no effect in the world what so ever.

So now I can’t listen to music at all. Cause streaming music is the only way I have been going about it for many years now. I have no physical item what so ever that can deliver music.

I got fed up with the owners and creators of spotify, and the completely unethical moneymaking online industry they have created – in great company with everyone else. They could do this only because all of us out there just went wild for almost FREE MUSIC – totally oblivious of the consequences.

Do we really just want commercial mainstream popmusic out there? Cause those who are in it for the fame and money are the ones benefiting on this system. Majority of artists can not support them selves nowadays, cause Spotify (and other similiar businesses) have decided to distribute the work of others almost for free.

And it is disgusting how much they profit from this crazy deal. And musicians had no other choice but comply to the madness, cause the listeners supported this fully. Me included. In the beginning I wasn’t aware of the extreme injustices, and I guess others too had difficulties getting the whole picture.

But enough is enough. While seeing how the pandemic situation hit hard on musicians who now had been forced to focus more on live performances, it became so obvious how sick the music industry has become.

So I made my standpoint by deleting my Spotify account a month back – with a kind of kick ass mentality. And it passes totally unnoticed by the world… ofcourse.

Like every other political standpoint I’ve made. As when I opted out from Facebook (because of many reasons), or got a phone with no internet connection (because of the surveillance), or poured fake oil outside a big bankoffice in the big city. Absolutely nobody cares. It only complicates my everyday life situation even more.

But the pay off in all this is that I at least can say – to my self, cause there’s no one else around – that if everyone did like me, we would have a better world.

That’s my basic intention in all I do. But when I see others out there contributing with ACTUALLY making positive changes, my attempts to contribute feels kind of lame. Like kind of smug.

Well, even the sun has stains, they say – so who am I to think I should be better. Perfectly imperfect. Me. Always.

Sitting here at a cafe in Krylbo, making my statements. Wish you all a beautiful day out there, where ever you are. 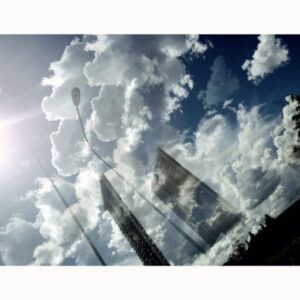